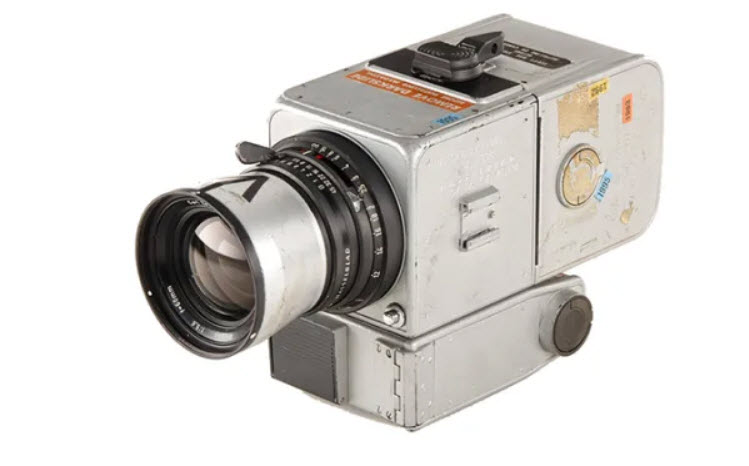 The Data Camera used on the lunar surface during the Apollo 11 mission and later Moon landings was a 500EL with additional modifications. And according to NASA this camera withstood the incredible heat and cold extremes of the Moon. Interestingly enough the camera had no modifications that would make either it or the film safe for operation on the Moon. According to it’s manufacturer the cameras sold to NASA for inclusion on the Apollo missions were off the shelf Moon cams: Hasselblad 500EL series. And also according to the manufacturer the only apparent modifications made by NASA was a harness and an external exposure button.

Now, because a quick visual inspection is possible it’s plain to see that modifications such as a tiny heater or some sort of insulation are clearly not built in. The camera mount point attached to the astroNOT’s space costume (suit) and other than these modifications no insulation exists.

According to NASA the Kodak film that went into this camera was able to withstand the Temperatures on the moon. Which are incredibly hot in the daytime, about 100 degrees C (212° F). At night, the lunar surface gets as cold as minus 173° C (343° F). And this wide variation is because the moon has no atmosphere to hold in heat at night or prevent the surface from getting so hot during the day.

The inner workings of any 1969 color film includes a liquid emulsion strip that is opened and spread during the development process. Film can be in heat without being ruined, but long periods of exposure will greatly affect it. And the heat mutes the colors, brings the contrast down, and has a significant impact on overall quality. And while cold may not have a terrible effect on processed film, it will destroy undeveloped film.

What Sort Of Temp Extremes Could The Film Take?

Unexposed camera film will only remain intact up to 32° F (0° C) before the liquid emulsion freezes. And renders the film useless when it cracks and breaks. Undeveloped film can only take up to 115° F (46° C) before the film is ruined. In addition there is another factor that would ruin the film. And that is that undeveloped unexposed film will certainly show white spots from solar particle bombardment.

In 1986 the Chernobyl disaster killed photographers within days after being exposed to the open core in a helicopter. The images these brave men recorded showed a white cloud of speckled areas caused by radioactive particles streaming from the exposed core. Shouldn’t we expect the same thing to happen to undeveloped film in deep space devoid of protection from an atmosphere?

The fact that no protection was built in to these camera’s further illustrates that no Moon landing took place. And that the film for the camera’s was not altered to take the temp extremes either. All this just goes to show that NASA used off the shelf Moon cams: Hasselblad 500EL

Learn what the temperature is on the Moon

Learn more about the temps that Kodak film can take

Learn what happens when film melts