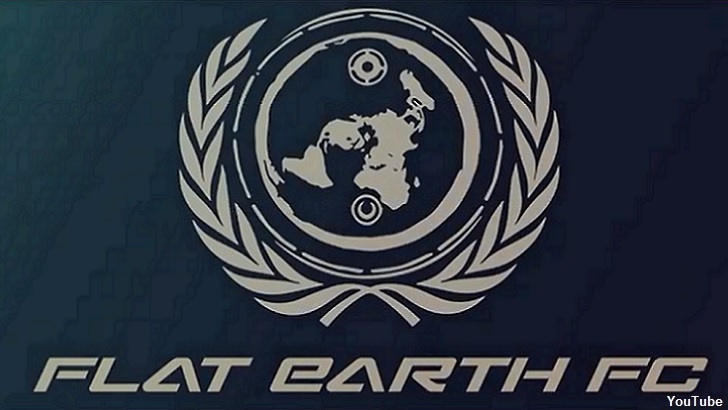 Mostoles Balompie, a Spanish Soccer team, changed its name to Flat Earth FC in June of this year. This unprecedented move comes after a promotion to the Spanish fourth flight division. The team’s president, Javi Poves, said that the change was in fact to support the fringe theory. This really doesn’t explain why a Spanish soccer team renamed itself to Flat Earth Fight Club. It’s likely that the publicity angle is what this is all about. But that’s only half the story friends. The amazing prejudice against flat-earth people is what the soccer team hopes to showcase.

And that sentiment of acceptance falls way short when it comes to mainstream news. The web “news” site Deadspin dot com stated that the community was “one of the dumbest fringe beliefs” and that “the whole point of this was to giving his very stupid idea more outreach by way of hanging onto the most popular sport in the world.” Which is actually a commentary and not part of the news story because of the clear bias that this and many other news services has against flat-earthers. In this case it’s so prevalent that it sticks out like a sore thumb.

The prime directive of any news correspondent is to prevent becoming a part of the story like this. If a reporter is going to do a news story it shouldn’t jump back and forth between commentary and fact. Calling the flat-earth collective “stupid” among other terms, is of a commentary nature and shouldn’t be mixed with a news story. This is a classic example of an opinion factory. And we highly suggest you stay away from opinion factories and formulate your own.

“We are a professional football club in the Spanish fourth tier and we are born to unite the voices of millions of flat earth movement followers and all those people who are looking for answers.”

If this statement is on the level, then the flat-earth community has just received a serious pat on the back and a bone fide’ offered up by a wonderful group of people. And if it is not then it’s a cruel joke played on innocent people who don’t deserve this. One can only hope that it is not the latter. We have come a long way in the flat-earth collective and Heaven knows we are due for an Allie.

This could mean a general acceptance in Spain, if not other places in Europe. We have to understand the wonderful gift that Javi Poves has given to the collective. The gift of acceptance, and it is something that will take some getting used to around the flat-earth community. So far we have not been treated in a kind manner at all. And we have become accustomed to be treated badly by the press. One can only hope that we have seen the worst of those times and a new ideal is arising.

We should have a Javi Poves day and let the man and his team know just how much we appreciate his gesture!

See what FOX NEWS is saying about it