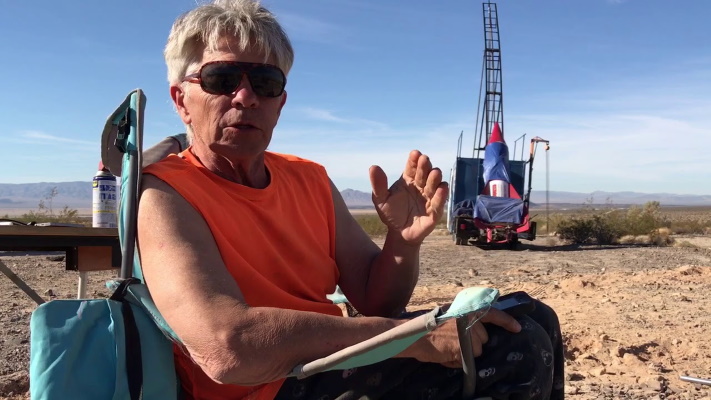 On August 17th of this year Mad Mike Hughes, the world’s only TRUE astronaut, is setting up his home-made launching pad and attaching it to his rocket. He will once again attempt what Evil Knievel and others apparently could not do. To build, launch and pilot a home-made rocket into the sky. That’s right friends, ladies and gentlemen, boys and girls… Mad Mike Hughes flies again!

Let’s not get too hung up on the name “Mad Mike” either. Mike Hughes is quite lucid, he knows what he is doing and has other launches of the same nature under his belt. And we look for a triumphant launch this time as well. He plans this time to launch himself 5000 feet in his home-made rocket. His previous launch netted him 1,875 feet (572 meters) He also went 350 MPH on that attempt, blasting world records involving home-made vehicles.

Mad Mike will launch himself in a steam powered rocked of his own creation that is similar to the one he used last year but highly redesigned. He will be as the first time, a lone pilot as the tiny rocket barely has enough room for him inside let alone a co-pilot.

When one says “steam” powered rocket they are using a metaphor of sorts. What his rocket emits from the tail is not steam in the average sense of the word. It is a chemical reaction caused by the fast release of hot water and certain compounds. When they come together in the rockets motor they become more reactive than volatile rocket fuel. And that is what gives the tiny rocket the same power and lifting abilities that NASA’s 300-foot behemoth’s have. Pound-for-pound the fuel used in Mike’s rocket has the same lifting power, or at least comparable.

NASA Tried The Technology And Passed It Up

Why doesn’t NASA quit laughing at Mad Mike and pick up on his work? It’s likely because NASA likes to put on a big show with the sonic booms and the highly volatile space rocket fuel. It would actually make much more sense to use Mike Hughes‘ method, ,But NASA wants to get a big bang on the ground. Fuels like kerosene and benzene are added to the rocket fuel to do just that.

The whole world should stop and take a look at the design that Mike Hughes has come up with and come to take it seriously. In our parents time they had Howard Hughes building airplanes. And in our time we have Mike Hughes building rocket ships. Either way, what an exciting time to be watching.

Best of luck to the iron-willed designer, daredevil, astronaut lucid madman… Mad Mike Hughes. Best of luck on your launch and especially on launch recovery. You know, what happens after all the steam clouds and 350+ MPH happens.

Read More About The Launch

Read What Space Dot Com Has To Say About It.