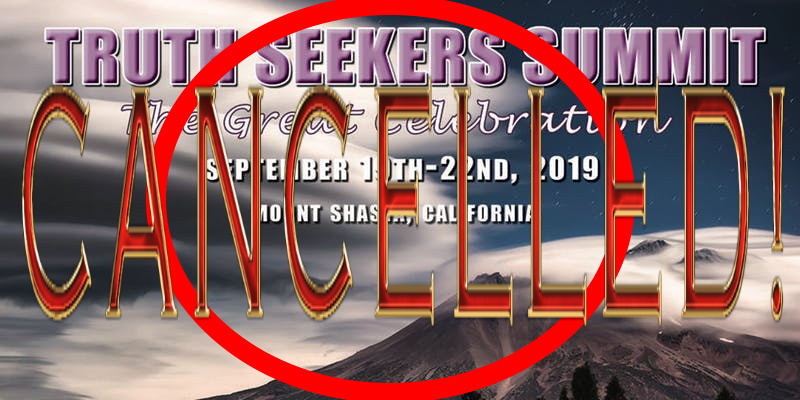 The inaugural flat-earth conference was set to be staged on Mount Shasta in California, USA. The web site touts that it’s 3 full days of exclusive conference over the fall equinox with eleven profound speakers and presenters who will help them to expand their consciousness and understanding of life on Earth as they think they know it.

Conference goers thought that they were going to explore other possibilities of existence and dimensions. But what they got was an E mail from event promoter Jonathan Shalomar saying that the first annual Truth Seekers Summit was cancelled!

We managed to obtain a copy of the E mail sent from the event promoter to the people who bought tickets and the speakers, event promoters and fans.

“This is to let you know that for many different reasons, the flat earth conference
that was scheduled for Sept. 19th -22nd has been cancelled.
there are many reasons why this has happened.
Presenters dropping out. Presenters being threatened. production company
disbanding, only two tickets sold, which will be refunded. production company being
threatened by local crazies and more. of the original nine, only four of you
did not drop out.”

So what we get from the E mail is that several “crazies”, locals, were threatening and forcing event promoters to back down. Of nine original promoters five of them caved into the pressure and backed out of the conference. And only two tickets were sold and that money was refunded. Because of this event promoter Jonathan Shalomar decided to cancel the event.

According to flat-earth guru and close friend Mark Sargent, who was actually one of the scheduled speakers, The inside scoop is that it was mostly one local woman. Her name is Inanna Snow, and she lives high up on Mount Shasta. She is also a self-professed Wicken (witch), Vegan and flat-earther.

She was protesting the presence of a large event coming to what she calls her mountain. She is mostly responsible for the threats and the promoters pulling out. It can only be surmised that these promoters don’t want to upset the Wicken community.

What’s hard to understand is why this happened, how could a supposed flat-earth believer conquer a flat-earth conference this way? It is her mountain and she claims to be the Queen of the summit. We cannot comment on that, but we most seriously have to comment on her tenacity and her courage.

A series of YouTube videos shows her attending fireside chats with other groups and forcing them to stop bringing meat onto the mountain. As a Vegan one can only imagine what the smell of roasting meat would do to her. She has also claimed that such large crowds as those drawn by a commercialized event like this one would be detrimental to the ecological aspects of the mountain.

No word on whether a second attempt at organizing the lost flat-earth event is under consideration by event promoters. Mark Sargent says that Flat Earth members will feel peer pressure from many different angles. It’s a shame that the promoter gave into the opposition. The conference voice was filled almost immediately by the South Carolina Flatoberfest, and he is looking forward to attending that event.

Get To Know The Shasta Summit Queen Inanna Snow