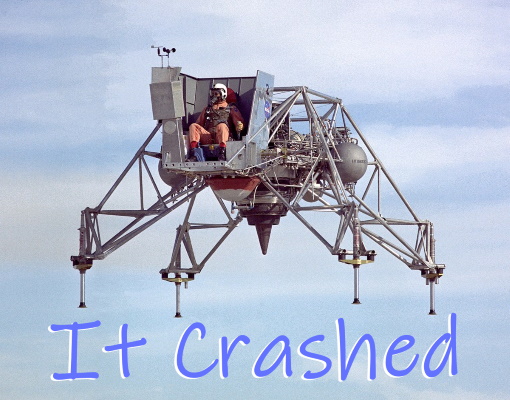 The Apollo Lunar “LEM” (Lunar Excursion Module) had an on board computer that was supposedly able to land the module on it’s own. Trouble is, during ground testing in 1968 Armstrong was manually controlling the stable test bed vehicle and crashed it… nearly killing himself in the process. This doesn’t seem like the way to test a space vehicle. This is the story of the crazy contraption that nearly killed Neil Armstrong. 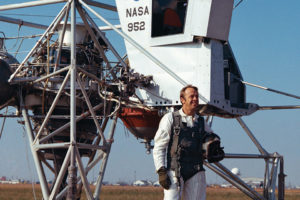 Alan Shepard stands beside an LLRV in 1970.

According to Wiki: “The Bell Aerosystems Lunar Landing Research Vehicle (LLRV) was a Project Apollo era program to build a simulator for the Moon landings. The LLRVs were used by the FRC, now known as the NASA Armstrong Flight Research Center, at Edwards Air Force Base, California, to study and analyze piloting techniques needed to fly and land the Apollo Lunar Module in the Moon’s low gravity environment”

What this means is that the Guidance computer was completely untested before it attempted a Lunar landing. This also suggests that the best way to test a Lunar lander is to crash it with your number one pilot aboard and at the controls. This may seem like the way that they have always done things, but that’s not true. There was never a succeeding test bed vehicle, Armstrong only had about 30 seconds at the controls of the test bed vehicle and the guidance computer had none at all.

Best Way To Test It, Crash It

Can you imagine? The computer was untested and they went anyway. And here’s something even weirder, even though Armstrong couldn’t successfully pilot the vehicle they considered it a successful test. And even more bazaar was why Armstrong was piloting the vehicle instead of the guidance computer. I mean, you know… the computer was supposed to land the darned thing anyway?

None of this makes sense to me until I apply the concept that the whole Moon landing thing was just a sick joke anyway. THEN it all makes sense. The testing procedures deployed by NASA to test it’s Lunar Lander seems like folly and it is, none of it was real.

Armstrong’s test was just another scene for the movie.

One would very well have expected to see images from NASA of Armstrong piloting one of the LLRV’s along and flying with ease, like Shepard did in the 1970’s. Instead what we were shown was Armstrong piloting the thing for a few minutes and then suddenly ejecting while the test bed crashed. Armstrong’s parachute was all that stood before him and a certain death as he lost control of the vehicle. It crashed just feet from where his parachute let him down.

Rather than NASA building another test bed vehicle, they packed Armstrong and his crew off to the Moon in and untested lander/orbiter craft that crashed in tests back on the ground. What an amazing feat, no one would have expected it. Again, had Armstrong been able to fly the thing it would have been a different story.

See what Wikipedia says about the LLRV’s