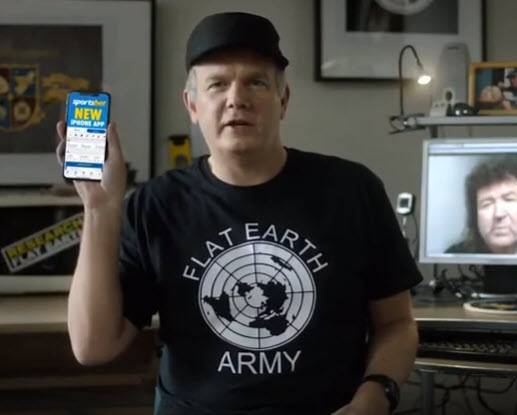 Mark Sargent’s new Australian TV commercial has got the whole flat-earth community in an uproar. “Fools” It starts out, “They are everywhere…” Now, granted it doesn’t look good on the outside… but according to Mark Sargent in a recent interview, the commercial strikes outreach gold!  Face it, Mark’s no fool, so anytime Mark Sargent appears in a TV commercial, there has got to be good reason. And processing a buck into his pockets is not it either, perish the thought.

According to Mark, there is nothing of the like anywhere… no television commercials that depict the flat-earth in any way. We are for all intents and purposes, an enigma. Generally, when people think of a flat-earther they haven’t got a clue that real, normal people are flat-earther’s. What Mark Sargent just did was give the people of the flat-earth a first glimpse of a real flat-earther. In Mark’s own words, the production company was going to film the commercial regardless… it was an incredible opportunity to fill the roll with a real flat-earth believer rather than to use an actor.

Judge Not, Lest Ye’ Be Judged

Because no mainstream television commercial/show/movie has ever done this before, we need to look at what Mark Sargent has done in a different way. We know Mark well here at Flat Earth Media Group as he has been on our shows dozens of times with various hosts. And unlike most flat-earther’s we think we see what he has really done, and it isn’t to depict the flat-earth community in a bad way either. At any point that a flat-earther takes themselves so seriously that a bit of ribbing triggers anger, then it’s clear that said flat-earther has a major problem. You need to step back and rethink yourself!

Don’t Let This One Go Right Over Your Head

It has been said that publicity, even bad is good. And that’s so true. If you look deeper into what Mark has done here you can see that. Now we are getting the notice that we so strongly desire. People like Robbie Davidson stress and spent vast amounts of cash to present the flat-earth to the public, what Mark has done here is the exact same thing. He has presented the flat-earth before the people. Albeit in a humorous way that many will find objectionable, it nonetheless worked.

Although it pains us greatly to say that, it’s also very true. People break into laughter at the very mention of the term “flat-earth” And it is for this reason that many flat-earth people simply will not understand what Mark Sargent has done here. But it will have to be enough to say that this will not harm the movement in any way because the movement already looks ridiculous by its nature.

Flat-earth now has a face, and it’s not just an average YouTuber like so many of us either. It’s a real guy that you saw on television, and he made you laugh. Hey, how about that? The only other thing we can suggest is that if this commercial angers you and you take yourself and the collective so serious that you can’t take a joke, become a militant Vegan or something. There’s no place among the flat-earth collective for militancy.