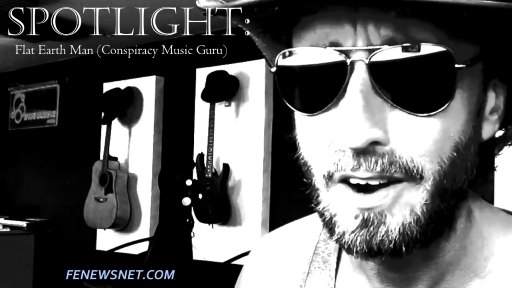 The dictionary defines altruistic as: Showing a disinterested and selfless concern for the well-being of others; unselfish. Such words come to mind when we think about Alex Michael. You may know him as Flat Earth Man or Conspiracy Music Guru. If you listen to Alex’s music, you may think he’s from Texas or maybe Virginia or any of the Appalachian states. If so, you are in for a shock! This baritone-voiced country crooner was born and raised in the UK.

Get That Friends, Flat Earth Man is a Britt!

At first glance, his charming British accent leaves you searching the halls saying… no, I came to interview Flat Earth Man… who are you? Alex Michael is, among other things, an accomplished actor. The character of Flat Earth Man and others is his own personal creation. His multifaceted personality is incredibly entertaining and so unique that we almost had to create a new genre just to place his music into.

And indeed, we have… we call it Flat Earth Music.

What About The Man Behind The Character

It’s important to know that Alex Michael, the man, is a well-known stage talent that more than paid his dues playing in many of the pubs and nightspots that The Beatles played. He cut his teeth on the classics as an upcoming musician and is well received throughout the local spots that he played, Alex says he really loved playing Beatles songs and anything else that the crowd would cheer him on to play. The part of Flat Earth Man is the newest manifestation of his rich talent. He has taken a few years off of his own stage career to play the Flat Earth Man.

How Did Flat Earth Man Develop

When asked how the character developed, he says that it initially came out of the writing of one of his first hit’s “Puppet Show”. During the writing of the words, he says it just didn’t sound right to him with his typical British accent. He just thought the song had a more country-ish ring to it. It was more like one of those “tears-in-your-beers” songs sung by some bigger than life brassy cowboy. And did he hit the nail on the head!

“I guess that some point”, remarks Alex, “I became sick and tired of living in the British monarchy under The Queen.” And so he and his wife and their dog Flat Eddie fled the Motherland of jolly old England for the Spanish coast where they now reside. Many of you will no doubt recognize the cute little Cocker Spaniel from most of his videos. Seems that these days everybody in the flat-earth collective knows his work as Flat Earth Man and has come to love it the way we do around here.

How Does He Create Those Incredible Hilarious Videos

Owning a modest sound and video studio, he uses it to record most of his music and to edit his work. It’s actually made easy by modern drag and drop software, he says when asked about his expertise. And of course no small amount of heavy editing and shooting followed by more editing and more shooting. A single video can take months to complete because of all the components. The video portions are done using a “green screen” and some cool software. He just painted one of his walls green and it works perfectly. The artist doesn’t use a full backup band nor does he do his travelling stage show with one. He uses recordings of himself, layering and multi-tracking to create his delightful videos.

Alex is for all intents and purposes… a one man band! When you listen to his music you will hear him perfectly harmonizing with himself and playing all of the instruments. Which include many variations of both acoustic and electric guitars, a fiddle, a steel guitar and a few others. In fact, the FE Man stage show features nothing but the man and his guitar, and what a show!

Has Flat Earth Man Ever Been To America

Alex appeared as the only major stage act at last years Flat Earth International Convention in Denver Colorado. His followers and those that had not yet experienced his unique brand of music alike enjoyed his onstage performance. Alex says he’d never been to the state’s before and it was a wonderful time for him. Although his wife is originally a Yank like the rest of us, they met in the UK. Their new home in Spain features 360 days of sunshine a year and that’s quite a far cry from his home back in the UK where storms and fog are the lifestyles. The man can’t ever see himself going back to the UK again, except to visit family, of course

The album/CD of the same name was released officially in December of ’18. It’s available for purchase or download at all of the major stores including iTunes. You can catch his YouTube channel by searching for “Conspiracy Music Guru” or by inputting the names of any of his releases. Alex makes his material free to use for any non-monetary purpose online. But we would like to highly recommend and advise that you support the brother’s work and reward him for his compassion and service to the flat-earth collective. Just simply buy his album, and let him know that he is appreciated and greatly loved in the US of A, cause he is!

After appearing on my radio show on FERLive, Alex awarded the station with the rights to play a live acoustic version of a previously unreleased song on the air for a full month before the public heard the final release. Alex Michael is an altruistic singer, songwriter, musician and actor. Because his dedication and his unbridled generosity have brought his fans his music in a way that is totally alien to us. It was given to us as a gift from the musician, not to make him rich or to get his songs on the top 10. Which BTW, was the case with the song Puppet Show a few weeks back when the song actually got into the Top 100 on the British Country charts. The last I heard it’s still rolling and other songs are upcoming.

Why Do Rockets Never Go Straight Up When They Launch?