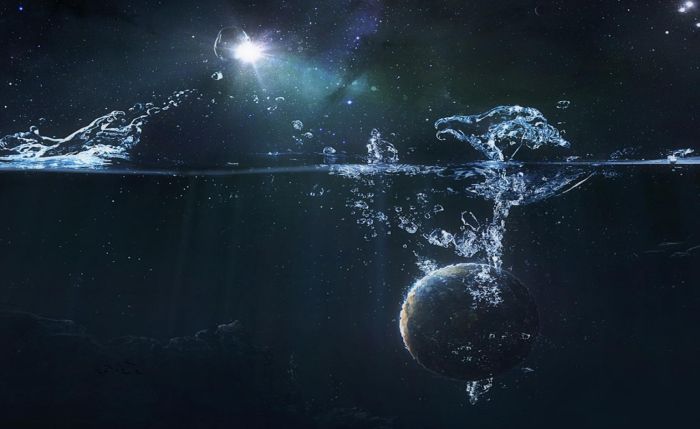 For the last 100 years, NASA and Hollywood filmmakers have sold the idea to the public that outer space is just a giant black endless void of empty space. We have all seen photos and videos of astronauts supposedly going up into outer space. However, we only see them orbiting close to the Earth. How come we never see them go farther out into the darkness of space?

The only time that we ever saw astronauts appear far away from the Earth was during the famous 1969 moon landing mission. Of course, that video footage was very choppy and hard to see. Questions still exist over whether it was legitimate footage or a hoax. After all, why haven’t astronauts gone back to the moon in the last 40 years? You’d think with all the advanced technology we have today, a trip to the moon would be easier than ever. Perhaps it is because there is no moon to go to. Just a rock inside of a large ocean of water that makes up the real outer space.

Albert Einstein theorized that outer space is water. Unfortunately, the scientific community did not agree with him… at least publicly. The truth is that everything is a theory when it comes to outer space. For instance, is there any way to measure whether the Earth truly spins at 1,000 mph? Is there any way to determine whether gravity is truly real? You can supposedly go up into outer space to test this theory, but how many of us will get that chance? We’re forced to take the word of NASA that gravity is real on Earth and non-existent in space.

Therefore, how can anyone honestly dismiss the notion that space is water? It is a scientific theory like any other. In fact, NASA even admits that water exists in space. In 2009, they discovered clouds of cold-water vapor around a solar system of a nearby star. Just a little bit of this cold-water vapor can create oceans of water on a planet. Although NASA is not admitting that literal oceans exist in space, they do acknowledge the presence of this vapor that can create oceans. So, why are they so afraid to go a step further and admit there are oceans of water in space?

The answer is simple. They don’t want people to know about the Flat Earth. If you were to go up past the exosphere of our planet, you would hit an endless ocean of water. More importantly, you would be able to look down through the water and see the world for what it really is. An endless flat mass of land that goes on forever into the distance. Again, that is why astronauts don’t like to travel too far away from the Earth. They know they would end up in the space ocean if they did.

When most people think about a bright star in outer space, they think of a hot plasma-filled sphere like our Sun. It would be inconceivable for them to believe that a star like this could ever create water. But since stars are linked to the creation of life as we know it, wouldn’t it make sense that both water and light come from stars?

Researchers at the Herschel Space Observatory of the European Space Agency wanted to look deeper into this. They found a protostar in the northern constellation known as Perseus. It is believed that this protostar is only 100,000 years old or less, so it is very young for a star. Surrounding the protostar is a huge cloud of dust and gas, which is responsible for creating it. The observatory used an infrared instrument to detect the chemical elements of these clouds. They discovered that the clouds were made from oxygen atoms and hydrogen atoms.

If you remember high school science class, then you will know that oxygen and hydrogen are the two chemical elements that make up water. You cannot have water without these two elements. Therefore, one can only conclude that the protostar must be producing water if oxygen and hydrogen are present. This prompted the researchers to study those atoms and see which path they take. Sure enough, it was discovered that the protostar forms water.

How is this possible? Aren’t stars supposed to be like 180,000°C? According to the theory, protostars have a north pole and south pole just like planets. These are the coldest areas of a protostar, which are about 2,000-3,000°C. While this might seem hot to us, it is actually cold for a star. It is these low temperatures that allow protostars to rapidly shoot water droplets like a jet from their pole regions.

But as the droplets reach space, the extremely hot gas cloud surrounding the protostar turns the water into gas. The gas keeps moving until it eventually gets far enough away from the cloud to where the temperature is cold again. Then, the gas reverses itself and turns back into water.

If you consider how all the protostars in the galaxy are probably doing this same thing, this explains how outer space is consumed with oceans of water. The protostars are just constantly jetting out water that turns to gas and then turns into water again. All this water continues to fill up outer space and make it a bigger ocean of water.

Of course, we still need to convince people here on Earth that space water exists in the first place. At least, for now, there is a clear explanation as to where the water comes from. NASA might admit water molecules exist in space, but they won’t admit that oceans of water exist there and that our entire FLAT planet is surrounded by it. If someone could just make a homemade rocket and travel past the exosphere, then could discover this for themselves and a whole lot more.