Fukushima: Japan’s fishing industry is being devastated by Jellyfish. 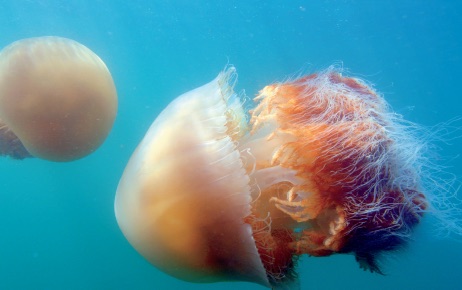 Giant Nomura jellyfish are invading over 60% of Japans shores since Fukushima. This development comes on the heels of the nations worst environmental catastrophe, and indeed the world’s. We all sat and watched the many videos of the Pacific ocean dying under the weight of the world’s worst nuclear nightmare. You will recall that the starfish population being dissolved like an effervescent tablet in a glass of water. And likely you will recall the fishing industry going belly-up due to devastated numbers and species of fish. Well now, because of Fukushima: Japan’s fishing industry is being devastated by Jellyfish.

The end stage development of this fish die off is the introduction of an invasive species due to the absence of the natural balance that once took place there. With little else to eat the tiny zooplankton the species of Nomura jellyfish, they are now giants of the ocean and can weigh hundreds of pounds each.

Japan’s Slow Death Due To Fukushima

By now many of you will recall little about Fukushima and the worst nuclear disaster in history. That’s because you have probably been misled to believe that it’s over. It’s not over, or perhaps you were absent from school the day we were taught about nuclear fallout. It lasts for Centuries… not years… and that means that the pollution and contamination left when three nuclear reactors exploded will be with us practically forever.

Japan’s already damaged fish industry is based on the fact that few fish are left in it’s coastal waters. And the one’s that are remain contaminated and ever shall. The world refuses to buy Japanese fish and let alone eat it because of the contamination. This has prompted the Japanese fishing industry to drop to an even lower rate. The sea’s around Japan are now over 60% infested with these jellyfish. And sadly, no end is in sight as each summer season the jellyfish return in city-sized blooms.

The absence of fish that eat the zooplankton are obviously to blame for this massive invasion of Jellyfish. This is because jellyfish have no circulatory system, no cerebral cortex, and basically no brain. Because of this they are not seriously affected by the ionizing radiation of the surrounding waters and in fact they thrive in it.

Why not eat their way out?

In a campaign to get the Japanese people to acclimate a taste toward jellyfish, fishermen have teamed up with marketers. These marketers have been processing and packaging the jellyfish and the Japanese people are starting to enjoy them. But this campaign still falls short of ridding the seas surrounding their country of the invading hordes. Campaigns have also been centered around conservation and introducing species of fish that are traditional predators.

As Fukushima continues to be a problem, so will the arrival of invasive species caused by the die off of native species. This will not only affect the waters of Japan, these jellyfish are capable of storing billions of microscopic eggs that are basically born pregnant. They will be arriving here shortly.