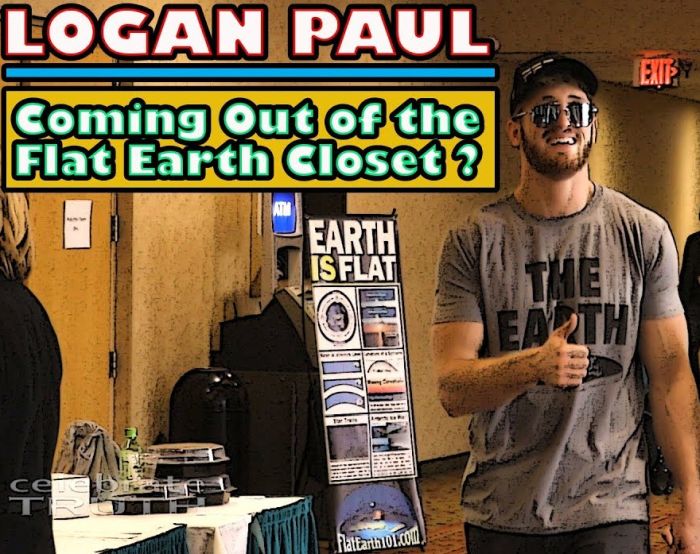 YouTube megastar Logan Paul is getting sued over his Flat Earth mockumentary by Mike “Mad Mike” Hughes, who is trying to ride a homemade rocket into space to prove the earth is flat.

Hughes, who has made a name for himself as the Flat Earth movement’s self-taught rocket stuntman, claims Paul filmed him under false pretenses at the conference. Although he’s no stranger to cameras (a documentary about him is forthcoming) or lawsuits (he tells The Daily Beast he’s suing the Department of Justice), Hughes is now attempting to sue Paul and one of Paul’s colleagues for half a million dollars.

“He came in using fraud and deception,” Hughes told The Daily Beast.

Much of Paul’s mockumentary was filmed at 2019’s Flat Earth International Conference in Denver, Colorado. At the conference, Paul delivered a brief speech claiming to “come out of the Flat Earth closet.” Paul’s movie interviews real Flat Earthers, but by the end of the film Paul reveals he does not actually believe the conspiracy theory.

The organizer of the Flat Earth International Conference thought Paul was open to the ideology when he allowed Paul into the gathering.

“I have a very good feeling he’s genuine,” organizer Robbie Davidson told the hundreds of Flat Earthers gathered for Paul’s speech. (On Friday, Davidson told The Daily Beast he didn’t believe Paul was “a genuine Flat Earther,” but that he was genuine about his investigation.)

But not everyone was on board. Prominent Flat Earther Mark Sargent withdrew from the lineup in protest over Paul’s attendance, he told The Daily Beast shortly after the conference.

“Logan’s team swore the conference promoter to secrecy, and when it was revealed, it caused some major ripples,” Sargent said in November email. “There were over 20 speakers at this event, and only Robbie Davidson officially endorsed him. My reasons for leaving were simple. His stunt at the Japanese suicide forest was unforgivable, and should be a social media life sentence. Having him try to use the Flat Earth members as part of a comeback is beyond insulting.”

Sargent was referring to a December 2017 video in which Paul filmed a suicide victim in a Japanese forest known for the deaths. Paul faced significant backlash for the stunt. But not everyone in the Flat Earth community, which has its own set of YouTube celebrities, was familiar with Paul.

Hughes said he didn’t even know who Paul was when he agreed to an interview.

“He parodied everybody. He used my image and I never signed a release,” he said. “I was never told what this thing was for. In fact, when he interviewed me, I didn’t know who the guy was. I didn’t find out until later it was Logan Paul, some YouTube guy, which still didn’t mean nothing to me. After this movie comes out, you find out he staged half of it.”

His lawsuit, which also targets Paul’s colleague Mike Majlak, claims “Logan Paul used my image twice in a recent movie / mockumentary” and that Paul “knowingly / willingly utilized fraud and deception while speaking and filming at the conference.”

They’re not the only ones facing lawsuits from Hughes, who subscribes to a conspiracy theory that incorrectly claims people’s names are actually business entities that can be claimed by other litigants.

“I have a lot of court cases going on,” he said. “I’m not one to screw with when I get pissed off. I know how to shut you down. Basically I have claimed legal entities for very famous people—they can’t even exist—which are Barack Obama, Mark Zuckerberg, Elon Musk, Warren Edward Buffett. I own the legal entities they’re operating under. They know this. I haven’t filed the claims yet. Well, actually, I did about Obama. We’re back in court May 7.”

Hughes said he’s not worried about his Flat Earth belief damaging his case.

“The thing is, most of these courts in San Bernardino know who I am and they’ve researched me,” he said. “In fact, a couple of judges have asked me how my back’s doing, when my next launch is, so they know who I am. Some of the bailiffs wave hi to me because they follow me on Facebook and see my launch. People know who I am.”

This story originally published at https://www.thedailybeast.com/logan-paul-sued-for-flat-earth-mockumentary-by-mad-mike-hughes