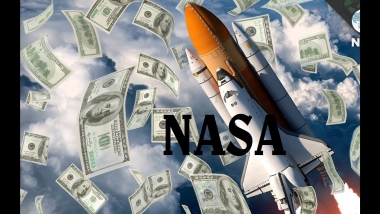 What’s a normal fiscal year of operating capitol to serve NASA and all of it’s many octopus arms that fan out throughout the flat-earth? $21 Billion? $35 Billion? $65 Billion? Depending on which agency or news service you listen to, it could be either of the three. Who can say? Particularly when the budget of NASA is right up there with the budget of a black op of some kind. But what would you say if you heard this from NASA: we lost 595 Billion tax dollars between the fiscal years of 2003 and 2005 due to clerical errors and book keeping mistakes from our financial department?

How Can The US Afford The Loss Of Over $5 Trillion?

A report written in 2015 by SpaceNews online magazine tells us that NASA’s budget is a drop in the bucket compared to NASA’s stealing. They actually misappropriated or “lost” over a half-trillion dollars of America’s hard-earned money. They only took 2 years to do it too, according to the report they only looked at FY’s 2003 and 2005. If Americans were to wonder if this goes on every two years or so, who could blame them? The potential is that in the past 16 years since the report states it began looking into it that over $5 Trillion has been lost.

Alarmingly, the report also mentions that high-ranking officials in the financial department are retiring soon and that will even make the problem worse. According to NASA, new financial officers are hard to find. Are Americans really supposed to believe that jobs at NASA in any department are sorely sought after except for in finance?

And what of the appearance of impropriety that a group of corporate finance officers retiring in the wake of such a loss gives? Understand that this incredible figure is not NASA’s operating costs. Which pales in comparison and is not even considered operating capitol but waste! The answer to the question of how America can afford this loss is simple, it can’t!

NASA: We’re Getting Better! Give Us A Break!

According to the auditors, they (NASA) haven’t been doing as bad as they had in previous years. Are Americans to take this to mean that there was a time when it was actually worse? You will recall that the report only took place once, looked at a two-year chunk and then vanished saying, keep up the good work. NASA says that the way it is structured makes it impossible to keep books and financial records in the “normal” way. But then, NASA doesn’t do anything in the normal way does it?

NASA financial officers state that the lost funds are simply due to clerical errors, but imagine this if you would, $5 Trillion. The question is often asked, if the space program isn’t real then what does NASA spend all that money on. Now at least one answer comes clear. Like the average run-of-the-mill mafia family it just cooks the money up in the books.

NASA reports that it’s annual FY draw on the nations coffers is a measly 0.5%, and compares itself to Social Security and defense at 25%. But it’s losses put it at the same levels of financing that the US Military Industrial Establishment consumes. While we may not be able to get along without social security and the military, surely we can do without NASA!