Somewhere Out In Space 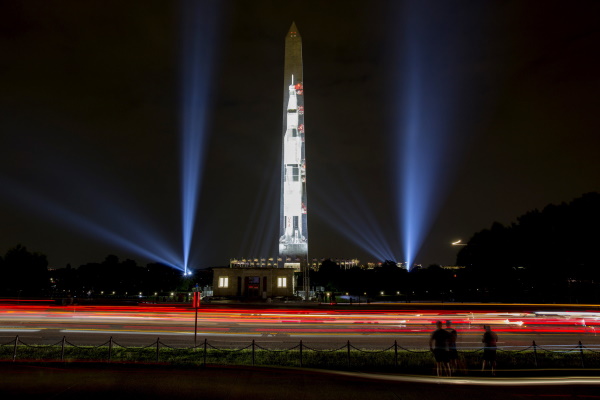 Picture standing atop its launching platform, the Saturn V booster and Apollo combination bound for the Moon. It is 1969, and the Saturn V – Apollo packet stands about 300 feet tall. Trouble is, only about 10 feet or so of this skyscraper will return to Earth. And even then, none of the parts that actually made contact with the Lunar surface will return to Earth. That’s because somewhere out in space, the Apollo orbiter is floating aimlessly, abandoned by its crew as they set out for home.

And could it be that the planners of the Moon landing fiasco had considered all that when they orchestrated the event? In case the day should come when questions were being asked. A day like today, as questions are finally being asked. Some questions can never be answered however, like the presence of any Moon dust or debris from the surface that can be tested for.

Let’s say for the record that you wanted to test for any evidence that we really landed on the Moon. And say you decided to test NASA’s lander’s and probes to see if they had ever contacted the surface of the Moon. Only thing is that probes weren’t designed to come back home, ever! And Lunar lander’s were left behind on the surface the day that the crew took off from it. How convenient for the liars, and what a pain that is for anyone looking for convincing evidence that DOES NOT consist of images.

NASA: Say It All In Pictures

“Images” they are called, they are not even fit to be called pictures. What NASA present’s as evidence are not pictures in any sense of the word. By its own admission NASA scans multiple pictures into a computer and it produces an image. Or a conglomerate of pictures that present whatever image NASA chooses to have you accept. Until recently, no one has ever questioned these images. But now they have all come under suspicion by an ever-increasing number of people.

“It Is Photoshopped, But It Has To Be” says Rob Simmon, NASA imaging expert and general visual con-artist. Talking about NASA’s method of rendering hundreds of photo’s into a single image or set of images. He also states that, were it not for this you probably wouldn’t be able to see anything but blurry dark clouds. Is he suggesting that space is not the bright colorful place that we have all come to believe in?

If NASA were ever relieved of its visual and photographic evidence, what would it have left? How else would the Big “N” respond to the question of, can you prove you went to the Moon? Of a certain, they would immediately resort to some TV images or other photographic fakery, but just what if? What if they were no longer allowed or able to do that? How else would NASA prove that we went to the Moon?

It can’t be ascertained by any of the rockets ever sent to the Moon because none of them ever came back.

Learn More About How The Saturn V Rocket Works